Don’t Get Scammed By The Fake Microsoft Tech Support Scam 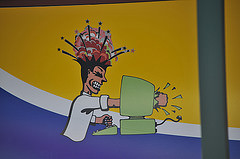 The Microsoft Tech Support Scam continues to search for victims. A Microsoft executive who heads the company’s customer service and support group, said in a May 2, 2014 blog article; “What’s really alarming is that this type of scam shows no signs of slowing down”. These scammers are targeting individuals and businesses.

The scam relies on a combination of aggressive lies and tactics. A caller posing as a computer support technician, most often claiming to be from Microsoft, tries to trick you into believing that your computer is infected with a bad virus. Then the sale pitch starts, with the scammer attempting to convince the you to let the “technician” remotely access your computer.

These fake support technicians only want to separate you from your money for worthless “help” or sell nonexistent warranties. Many times they will install malware on your computer while they have it under their control.

A senior security researcher from Malwarebytes has played along with a Microsoft technical support scammer, documenting the whole episode in a video, to showcase the social engineering that takes place.

For the uninitiated, the scam involves people in Indian call centres ringing up and saying that they are representatives from Microsoft technical support. They then tell the victim that their computer is running slowly because of viruses or because they need an additional piece of software — at a cost, of course. It’s been floating around for almost as many years as the Nigerian money transfer scam and is still going strong.

This week, the scammers called the wrong person: Jerome Segura, a senior security researcher at anti-malware company Malwarebytes. Being familiar with the sting, Segura played along with the female caller, recording the entire episode in a handy YouTube video. It’s not the first time that scammees have documented scammers — there are many videos on YouTube such as this one, this one and this one — but Segura made an effort to remain calm, not try and troll the scammers and genuinely try and understand the sophistication of the scam. He didn’t expect it to turn nasty at the end when the scammers became impatient and deleted a load of files from his computer.

Most Wired.co.uk readers will have a highly-tuned Windows scammer filter, but we’ll know of less tech-savvy relatives or friends that might be drawn in. Segura told Wired.co.uk: “Many of my family members have received these calls, so I wanted to play the game to see how the scam worked. My aim was to be totally respectful and play the perfect victim.”

As soon as Segura received a call, he decided to turn on his virtual machine and start recording the call and his computer screen. The caller — initially a woman — directs Segura to look at his Event Viewer, which logs all Microsoft error reports. She asked him to count the number of red cross-marked errors and yellow warnings, before warning him: “These errors and warnings are very much harmful for your computer. These are major problems and it doesn’t matter if you have one or two errors or more than that. Each one has already started corrupting your whole computer system.”

Read The Rest Of The Article Here